What are Most leading causes of death in the US?

Top Leading Cause of Death in United States (US)

About seventy four percents (74%) of all deaths in the US occur as a result of Ten(10) major causes. Over the previous 5 years, the major/Leading causes of death in the United States have remained fairly consistent.

According to the CDC (Centers for Disease Control and Prevention) there were 2,813,503 registered deaths in the US (United States) in 2017.

The age adjusted death rate which is responsible for the aging population in United States, is 731.9 deaths per 100,000(1 lakh) people in the United States. This is an raise of 0.4 percent over 2016’s death rate.

However, the Center For Disease Control and Prevention advise that using age-adjusted rates is not accurate for ranking the causes of death.

Heart disease is the major leading cause of death for both men and women in the world as well as United States. More than half of all people who die due to cardiovascular or heart disease are men. It occurs due lack of HDL cholesterol in male than female. 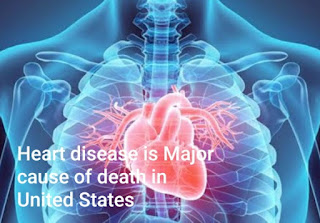 Medical science use the term of heart disease to describe several conditions. Many of these conditions relate to the buildup of cholesterol plaque in the walls of the arteries and veins.

As the arterial plaque develops, the arteries narrow. This makes it difficult or unable for blood flow around the body and raise the risk of Ischemic Heart disease or stroke. IHD can also give rise to angina attack, arrythmias, and heart failure.

To decrease the risk of dying from cardiovascular or heart disease, a person can protect their heart health by taking a healthy diet and getting regular exercise 30min/day.

Being able to recognize the sign & symptoms of a heart disease (Myocardial Infraction, Angina,Acute Coronary Syndrome, Heart failur, and Cardiac Arrhythmia etc) can also help people get prompt treatment & potentially save their lives.

Cancer is second leading cause of death in United States (US).

Percentage deaths by Cancer in US: 21.3%

Cancer occurs when cells grow inappropriately,undeferentially, indirectionally, and do not die at the normal point in their life cycle. It happen abnormal mitotic cell Division. If a person’s body can not control the spread of these cells due to defect in cell Division and defective p53 gene, they can interfere with essential, life-sustaining systems and possibly lead to death.

Everyone has some degree of risk of cancer, but for most cancers, the risk will by increasing with age of person. Some people have a higher risk or lower risk of cancer due to differences in exposure to carcinogens(which substance cause of cancer), such as from exposure to chemical pollutants or smoking. Genetic factors also play a vital role in cancer’s development.

Race & sex also play a important role in people’s risk of developing cancer, depending on the type. The lung cancer causes more deaths in the US than any other cancer in both men and women in The US.

However, researchers are always taking advance steps to cancer treatment. Actually, the death rate from all cancers in the United States, has lowered by twenty six percent since 1991.

The American Cancer Society(ACSl estimate how many people will die from cancer in 2019.

According to ACS, the Most leading causes of death from cancer for males will be:

Acording to ACS,The Most leading causes of death from cancer for females will be:

Stroke is the 5th leading cause of death in the United States.

Cerebrovascular diseases develop due to abnormality with the blood vessels that supply oxygen and nutrients to the brain.

most common cerebrovascular diseases are including below:

More than 795,000 people in the United States have stroke Every year. The risk of stroke varies with lifestyle,race,ethnicity,and age of the person.The highest death rates in the U.S. occur by stroke in the Southeast.

Dementia refers to a group of clinical conditions that cause a decline in cognitive function. Reducing Cognitive Function affects a person’s ability to perform everyday activities.Damage to the nerve cells(Neuron) in the brain causes dementia. As a result of the damage, neurons can no longer function typically and the neuron may die. This, in turn, can lead to heavy changes in memory function, behavior,attitude, and the ability to think clearly.Alzheimer’s disease is just a type of dementia. Another type of dementia, called vascular dementia which can cause same symptoms but instead results from changes to blood circulation to the brain.Alzheimer’s disease people, neuron damage & death eventually impair their ability to perform essential activities and actions, such as walking and swallowing.

People in the final stages of Alzheimer’s disease condition may not be capable to move from their bed and may require around the clock care to the patient. Alzheimer’s is ultimately fatal have no cure. In the United States, an estimated 5800000 people recently have Alzheimer’s disease, according to the (AA) Alzheimer’s Association.

Alzheimer’s is also the one cause of death in the top ten that anyone cannot cure, prevent, or slow down form Alzheimer’s disease.

Best Glucometer in USA for doctors and Diabetics)

In short, Diabetes is multifactorial disorder characterized by persistent hyperglycemia due to absolute or relative deficiency of insulin. The body converts most of the food into glucose by enzymatic reactions, a simple sugar, which it can then use for energy. The pancreas (insulin factory), an organ below the stomach, and middle to the Duedenam makes some hormone such as insulin ,glucagon,somatostatin and pancreatic polypeptide cell, we discuss mainly about insulin which move glucose(Sugar) from the blood into the cells.

There are two main types of diabetes:

However, it is possible to control the risk of type 2 diabetes with lifestyle modifications, careful dietary management,and regular exercise.

Diabetes can cause serious complications including :

Suicide is also top leading cause of death in United States. It tenths causes of death. Common cause of suicide is depressiondepression amongs the world.
8.
9.
10.
Doctors Gang