Heart located in front and left side of the chest near to the apex beat.

Superiorly,  an imaginary line passing through the jugular notch ,

In inferiorly,   a parallel line passing through the xiphoid process

Heart composed by cardiac muscle which is striated but involuntary and have intercalated disc. 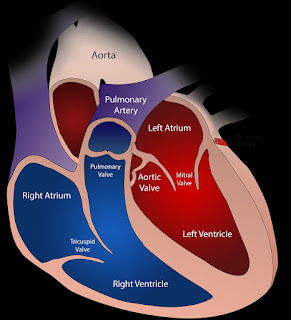 Heart has 4 Chambers in human :

The right atrium receives non oxygenated  blood from the  superior  venacava and inferior  venacava  and pumps it to the right ventricle through the tricuspid valve.

left ventricle
Receives oxygenated blood from left atrium
Then pump to the arch of aorta.

The heart is at the center of the cardiovascular  system, the heart  pumps blood through vassels  in the body to  the target target tissue. It is a  pyramidal organ made up of two muscular pumps that are

blood pass through the Right ventricle

The heart have three three muscular  layers of tissue. The inner layer is known as the endocardium and  outer layer is the epicardium. Between those two layers is known as the myocardium which is more thik than another.
The thickness of the middle layer  myocardium varies between regions of the heart.
the ventricles are altime thicker than the atria.
the left chambers are more thicker than the right Chamber , Left ventricle 3 times thicker than right ventricle    due  to pumps blood against greater resistance.

Coronary artery  gives numerous branches that supply  of the heart. There are several venous tributaries drain poor nutrient  deoxygenated blood from the heart and back it mainly to the right atrium; some vein have been shown to drain to the right ventricle.

In intrauterine life, a physiological shunting of oxygenated blood enters the right atrium and passes the left atrium by foramen ovale  then blood  passed to the left  ventricle and pump  throughout the whole body

Some blood pass right atrium to lungs for oxygenation  via Pulmonary trunk then pass to left ventricle.
As a result blood of left ventricle mixed of oxygenated blood and de-oxygenated blood.
that’s called feotal circulation. In Normal condition the gap of foramen ovale repair Normally within three month of extrauterine life.

Atrial septal defects refer to abnormal communications between the left atrium and right atrium.   In Normal condition the gap of foramen ovale repair Normally within three month of extrauterine life.

Unluckily,  over time, the right atrium will be exposed to relatively higher pressures and its myocardium will hypertrophy and enlargement . If the right atrial pressure increase more than the left atrial pressure, the shunt will be change from ( left to right) to  (right to left). As a Result , blood with lower oxygen(more de oxygeneted blood/less oxygeneted blood )  saturation will be passed into the systemic circulation and occurs hypoxemia for low oxygen saturation. 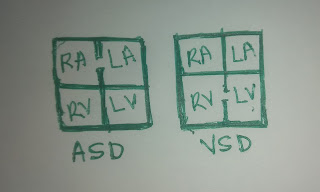 genetic cause of atrial septal defects

Most common types of Atrial septal defect (ASD) is Ostium secundum
commonly diagnosed in childhood.
60% patients of ASD are female.
Most Commonly seen in female